The Circle of 5ths is an extremely important element of music theory and has many uses, mainly in understanding how keys and chord changes work and are put together. But first, what is a 5th?

A 5th, or “perfect 5th,” is an interval. Intervals measure the distances between notes. Quite simply, it’s the distance between the first and 5th notes of a scale. So, if our scale is C, D E F and G and we replaced those note names with numbers, C being 1, D being 2, and so on, G would be the 5th. So the distance from C to G is considered a 5th. In the same way, C up to D would be called a 2nd, C to E is called a 3rd, and C to F is a 4th.

Lets look at the whole scale:

The Science of Why 4ths and 5ths Sound Right

Okay, sorry in advance if this next part gets tedious. You can skip it if you like.

There’s a reason both are called C; a reason both notes have such a similar sound to our ears. When we hear a C 260, the air is vibrating 260 times a second, and causes our eardrum to vibrate at that same frequency. If we hear 260 and 520 at the same time, imagine one part of your eardrum moving 260 times a second (i know it’s not that simple, but it’s easier to visualize) and the other part moving at 520 times a second. So, half the time the parts of the eardrum are moving in the same direction. The ratio between these 2 notes is 1:2 and an octave is the most harmonious or consonant combination of notes possible.

In this way, notes that have a low ratio sound more consonant, and those with a high ratio (the vibrations will coincide much less often) have a more dissonant sound to us. The ratio of C to G (260 to 390), the Perfect 5th, is 2:3 and then from G up to the higher C (390 to 520), the Perfect 4th, is 3:4. These combinations of notes still sound very consonant to us.

The good news is, we don’t have to do all these calculations, or even know these frequencies and ratios. All we need to do is memorize the Circle of 5ths. 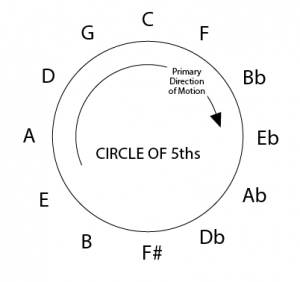 The Circle and Chords

The Circle of 5ths is the sequence of all notes that are a 5th (or 4th – remember moving up a 5th or down a 4th are the same thing) apart. In the same way the notes played together sound harmonious, chords that are adjacent in the Circle sound really “right” with one another. Going from a C major chord to a G major, F to C, and so on, just sound natural.

The Circle in a Key

Lets look at the notes of the Key of C in the context of the Circle.

The notes of the C Major Scale are

and would be numbered

Looking at the Circle, you’ll notice these 7 notes are all grouped together. the C, F and G are the 1st, 4th, and 5th tones of the scale. They are adjacent in the Circle and are the 3 major chords of the key. Next to these are the 3rd, 6th and 2nd tones of the scale. These are the 3 minor chords of the key. Lastly, the B, or 7th tone, is the only diminished chord in the key of C Major.

But, since we’re talking about chords instead of notes, lets use Roman numerals, and we can use upper case for Major, and lower case for Minor and diminished, adding a º symbol to denote the diminished chord: 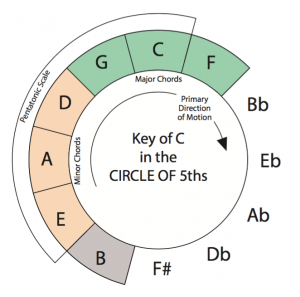 You can listen to some of my music here on my bandcamp page and even purchase copies if you like.

Visit the Modal Guitarist Facebook page and join in the conversation. Here you can read updates and comments by myself and other guitarists and post your own thoughts and opinions. I'm looking forward to hearing from you!